Horses have always held a special place in my life, and I was lucky enough to have the opportunity to have a horse and ride through my school years. I grew up in Minnesota, where you have to learn to deal with the long, cold winters, and you celebrate each and every summer day regardless of the weather. After years as a little girl obsessing over ponies, my mom caught the horse bug and it has been an activity that we have shared since I was twelve. We navigated our way through different disciplines and landed on dressage as our main focus, working hard and finding ways to afford training and shows in the region. I took my horse to university in Colorado, more interested in riding than classes, only to find out it was too much to juggle. Upon sending my horse home I was able to focus on my degree in Latin American Studies and Spanish, which opened the world up to me. I actually sold my horse so I could spend six months in Buenos Aires as an intern with the Fulbright Commission. This was my first time abroad, and much like catching the horse bug I caught the travel bug.

Realizing that my degree choice wasn’t conducive to a job that could support horses and travel, I went back to school and received a master’s in education, becoming a middle school Spanish teacher. I took up riding again casually and struggled through my first few years as a teacher, learning to love the students and question the politics inherent in the education system. After my mom’s lovely Andalusian passed away with heart difficulties, my heart broke and I started to look for opportunities overseas again. I found a job in Istanbul and was catapulted into the international teaching circuit.

Living overseas was the ultimate adventure, and the decent income and holiday time allowed me to travel extensively. I still gravitated towards horses as often as I could, either through travels, grabbing a lesson at a local barn, or finding someone who wanted a trail riding partner. I taught in Turkey, Thailand, and Barbados before returning to the U.S. once again in order to stay close to my family. I found the U.S. education system unbearable to stay in after working with the freedom and support of international curriculums. Frustrated, I changed careers and landed an account management position in the corporate world.

As I get into my forties, toiling away in front of a computer screen all day has left me wanting more connection to nature. I am craving to have that connection with horses again, to be outside with my head buried into their neck, breathing in their soft scent. When I am at the barn, I am fully present in the moment, and all of the daily stresses melt away. I feel most like myself when I am with horses, and I realize how much I miss what has always been a grand passion, a calling. Equine Diaries is a way for me to reconnect to horses and the horse world, to feed that sense of wonder and peace that comes with hours at the barn, experiencing it with others who also hold a passion for horses. It will take me on equine adventures where we will meet and learn from horse enthusiasts in all walks of life. I am excited to share this return to my horsey roots with all of you.

“No hour of life is lost that is spent in the saddle.”

OUR WEBSITE IS CURRENTLY UNDERDEVELOPMENT AND WE WILL BE ADDING CONTENT DAILY, SO PLEASE MAKE SURE TO CHECK BACK SOON! 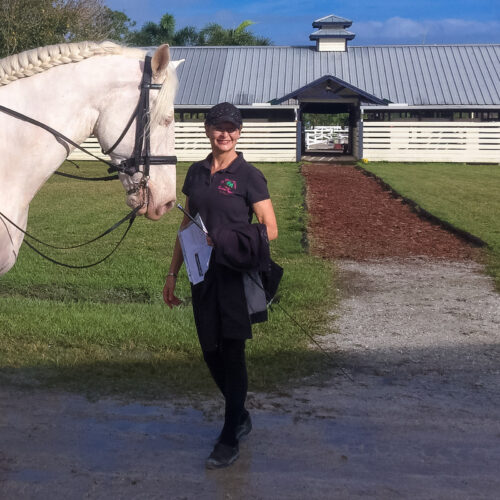 Ida Norris is a highly experienced and passionate horsewoman who travels throughout the U.S. to provide clinic opportunities in Traditional Dressage, Western Dressage, Working Equitation, and Classical Long Lining, in addition to judging competitions. She has made her living as a professional trainer, judge, clinician, and coach since 1985. More than half of her clients have become professional riding instructors and trainers.

Ida is the founder of the Florida Dressage Experience Program. This Florida based school is a seasonal, European style training school for professional trainers and riders who train their own horses. While in Vermont during the summers she teaches, trains, rides, and competes in Western Dressage , Working Equitation, and Traditional Dressage.

She has trained and ridden horses to numerous USEF/USDF awards. She is a Grand Prix competitor, and a Gold, Silver and Bronze USDF Medalist, with the accomplishment of training all of the horses that she received her scores on. She has also trained riders to numerous USDF medals. Being an accomplished public speaker, with a background in education, she is an enthusiastic, concise teacher of theory, riding and training. 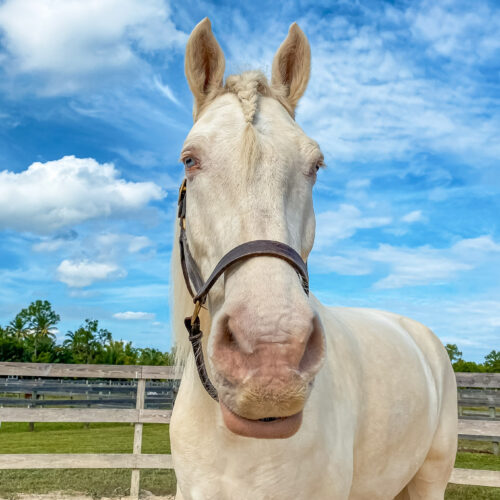 Until I was two I lived on a small farm in Alexandria, MN with my mom, Belle. A year after my own birth I was joined by my little half brother. Mom was a lovely, caring palomino Belgian mare. She put up with the two of us barreling around, and she gave me a lot of my easy going, stoic personality. Not much ruffled her feathers, and she barely put up a fuss. A large part of my character also comes from my Iberian roots. My half brother and I had different fathers, but they were both from Spain. My dad was a cremello PRE stallion named Q, which is very James Bond sounding. While I have never met him, I like to think of him as very dashing and intelligent. This is where I get my athletic ability and quiet mischievousness.
.
We had a quiet life on our small, rural farm. I am a foodie at heart, and love to eat. As a growing colt, I could eat to my heart’s content. I miss those days of eating whatever I like. Now I have to watch my figure, say the humans. Boy am I grumpy if I go out for training without my full breakfast! I also remember there was a group of pony clubbers who would come by and groom us. They are distinct in my memory because they insisted on giving me baths using the cold Minnesota water that comes out of the hose. Brrrrr….to this day I still dislike cold water baths, and the chilly spray from a hose makes me dance around. The kids were sweet though, and those were easy days. I had a beautiful childhood.

Not long after my brother was born, a lady came to look at me. I suppose she was curious, and was pondering giving me a new home. When I was taken into the arena, so that she could see me move around, I noticed that this woman had put her jacket on the fence while she was talking to our owner. I thought it looked like a great thing to play with. So I grabbed it in my teeth and I ran around the arena, flipping it up and down. This was a source of amusement, and the lady laughed. But she left, and I didn’t see her again for a long time. Over a year and half later she returned, and a new chapter of my life began.

I was moved to a farm in St. Cloud, Minnesota. It was a nice place, but the atmosphere was a bit more serious than my birth home. The horses there had jobs to do, and they carried around people on their backs. It was all very exciting. This is also when I met my new adoptive brother, Henley, who at the time was twenty. He is a Holstein, and a really big baby for such an old man. He is afraid of his own shadow at times, and very needy. Apparently he used to be a jumper, but I just don’t see it. Mom was always fussing over him because he had to have everything just right to be happy. We got along well though, spending our days in the pasture together and our evenings next to one another in our stalls. He has been attached to me ever since, barely able to let me out of his failing sight without freaking out. I have to admit that even though I harass him, I love the old man dearly.

My training began in St. Cloud, including how to carry a rider and the basics of something called dressage. It was all very interesting, and I took to my new role naturally. I had two riders at the time, my new mom and her trainer. On occasion my human sister, Dana, rode me too. Although she wasn’t around for much time, off traveling the world, (maybe going on adventures with Q). Life was good, I was learning a lot, and I always had Henley’s company. However the winters were cold, and we couldn’t do much during the white months.

Things changed, maybe it was because I was a bit naughty in those years as I started showing, or because we all got tired of the cold winters. We started going down to Florida for the winter. There we could skip the frigid weather, and keep training. I have to say that the first trip I was extremely nervous, even with Henley by my side, who oddly was quite happy with the arrangement. When we arrived, I dug a massive hole in my stall in protest to all of this change. There were strange trees all over, the grass seemed course, and these little lizard creatures were crawling all over the place. Not only that, but the stalls were open to the outside, and I had always been used to the coziness of a closed barn. After the initial shock I settled in and got to work. I was becoming a dressage horse, which I was good at. However, I always made my human counterparts work hard, there is no fun in giving it to them easy. So this is how it came to be that we moved between Florida and Minnesota every year.

Most of the time things were good and we kept on our schedule, but it wasn’t without challenges. There was one tough spring when I had to have surgery. I couldn’t breathe very well when I was working. The vet scoped my throat and found a flap that was covering my airway. I had to have it tied back in surgery so that I could breathe easier, have more endurance. It is really fuzzy in my memory, but I remember everyone being very concerned about me. A couple of months later I was better than new and moving up through the levels in my training.

After years of hard work, I made it to grand prix, which means I think I know it all. This year work has intensified because that little sister has popped up again has decided she wants to show with me. I am going to give her a run for her money, and hopefully she can figure out how to ride me well enough to compete in the FEI arena. I think she can, I like her well enough, and I am tired of the same old routine. Let the games begin.

Come along for the ride....